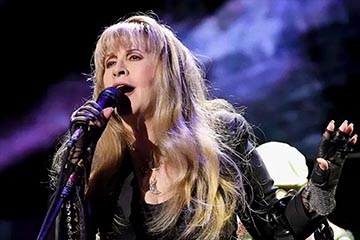 Stevie Nicks is performing at the MIDFLORIDA Credit Union Amphitheatre in Tampa, Florida on Tuesday, October 25, 2022 at 8:00 PM.

Stephanie Lynn Nicks (born May 26, 1948) is an American singer, songwriter, and producer known for her work with the band Fleetwood Mac and as a solo artist. In 1981, while remaining a member of Fleetwood Mac, Nicks began her solo career, releasing the studio album Bella Donna, which topped the Billboard 200 and has reached multiplatinum status. She has released eight studio solo albums and seven studio albums with Fleetwood Mac, selling a certified total of 65 million copies in the US alone. Nicks has garnered eight Grammy Award nominations and two American Music Award nominations as a solo artist. She has won numerous awards with Fleetwood Mac, including a Grammy Award for Album of the Year in 1978 for Rumours. The 1975 album Fleetwood Mac, Rumours and Bella Donna have been included in the “Greatest of All Time Billboard 200 Albums” chart by Billboard. Furthermore, Rumours was rated the seventh-greatest album of all time in Rolling Stone’s list of the “500 Greatest Albums of All Time”, as well as the fourth-greatest album by female acts.