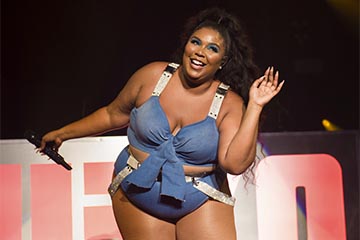 Melissa Viviane Jefferson, known professionally as Lizzo, is an American singer, rapper, flutist, and songwriter. Aside from singing and rapping, Lizzo has also worked as an actor: she served as a voice actor in the animated film UglyDolls (2019) and appeared in the crime comedy-drama film Hustlers (2019). She is also the host of the Amazon Prime Video reality television series Lizzo’s Watch Out for the Big Grrrls, which earned her a nomination for the Primetime Emmy Award for Outstanding Competition Program. In 2019, Time named Lizzo as “Entertainer of the Year” for her meteoric rise and contributions to music. In addition to her three Grammy Awards, she has also won a Billboard Music Award, a BET Award, and two Soul Train Music Awards.