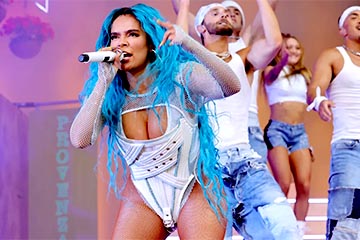 Carolina Giraldo Navarro (born February 14, 1991), known professionally as Karol G, is a Colombian singer, songwriter and businesswoman. She is predominantly described as a reggaeton and Latin trap artist, but has experimented with a variety of other genres including reggae and sertaneja. She is also noted for her prominent female presence in the reggaeton scene. In 2018, she won the Latin Grammy Award for Best New Artist, and has been nominated for several Billboard Latin Music Awards and Premios Lo Nuestro awards. In 2020, Karol G received four nominations at the Latin Grammys. Karol G achieved her highest-charting single on the Billboard Hot 100 with the top 20 song “Mamiii”, a collaboration with Becky G.