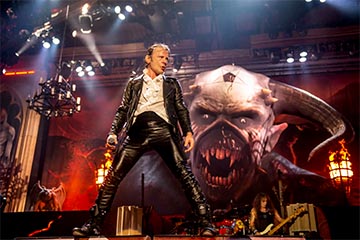 Iron Maiden are an English heavy metal band formed in Leyton, East London, in 1975 by bassist and primary songwriter Steve Harris. While fluid in the early years of the band, the lineup for most of the band’s history has consisted of Harris, lead vocalist Bruce Dickinson, drummer Nicko McBrain, and guitarists Dave Murray, Adrian Smith, and Janick Gers. The band’s discography has grown to 41 albums, including 17 studio albums, 13 live albums, four EPs, and seven compilations. They have also released 47 singles and 20 video albums.