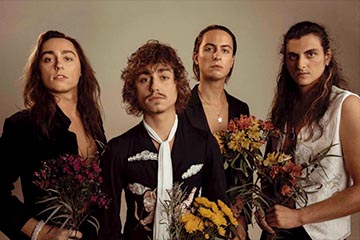 Greta Van Fleet is performing at the Amalie Arena in Tampa, Florida on Wednesday, October 26, 2022 at 7:00 PM.

Greta Van Fleet is an American rock band from Frankenmuth, Michigan, formed in 2012. It consists of Kiszka brothers Josh (vocals), Jake (guitar) and Sam (bass guitar, keyboards); and Danny Wagner (drums). They were signed to Lava Records in March 2017, and a month later they released their debut studio EP, Black Smoke Rising. Their debut single, “Highway Tune”, topped the Billboard U.S. Mainstream Rock and Active Rock charts in September 2017 for four weeks in a row. Their second EP, From the Fires, containing the four songs from Black Smoke Rising and four new songs, was released on November 10, 2017, alongside a second single, “Safari Song”. From the Fires went on to win the 2019 Grammy Award for Best Rock Album.