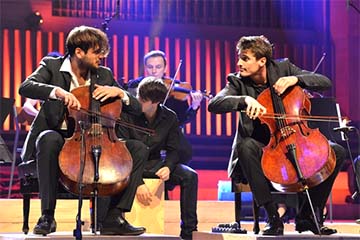 2CELLOS is performing at the Amalie Arena in Tampa, Florida on Saturday, April 13, 2019. 2CELLOS is a Slovene-Croatian cellist duo, consisting of classically trained Luka Šulić and Stjepan Hauser. Signed to Sony Masterworks since 2011, they have released four albums and play instrumental arrangements of well-known pop and rock songs as well as classical and film music. The duo performs internationally and has been featured on several US TV shows including Glee and The Bachelor.